A two-day conference to promote peace, security and sustainable development in East Africa, will bring together to Zanzibar, about ten former and current African heads of states, religious leaders and more than 500 youths.
Former President of Zanzibar, The Republic of Tanzania, H. E. Amani Abeid Kanume, and other leaders will deliberate ways to eradicate conflict radicalism among youths when the conference starts on July 22, at the Melia Hotel, and Zanzibar Beach Resorts.
The conference is organised by Global Peace Foundation (GPF), an international non-sectarian, non-partisan, non-profit making organisation that promotes an innovative, values-based approach to peacebuilding, guided by the vision of “One Family under God”.
Irish Director of Global Peace Youth, Ahmed Hassan Mohamed, is a long term resident in the Republic of Ireland and originally from Zanzibar.
He said there is a rampant problem of unemployment, which is fuelling the case of radicalism among youths in the East African coast, and adding that, a conference of this nature will bring innovative ideas to alleviate the problems.
“GPF has brought together different speakers, from the Inter-religious Council of Tanzania, the Office of the Mufti in Zanzibar and foreign leaders who will give their own perspectives of radicalism, and try to change the ideology of young people in order to move them forward in a positive light,” Mr Mohamed said.
The Irish Director explained that youth participants can benefit from best practice of GPF, such as the ‘Leap Hubs’, which are entrepreneurship and leadership centres.
“These are entrepreneurship incubation centres, set up by GPF, where youths with raw ideas, but with no entrepreneurship skills or business acumen or start-up capital can gain knowledge, skills and manpower to materialise their ideas”, the Irish director added.
The conference, which is tagged “Promoting Peace, Security and Sustainable Development in East Africa: A Call to Moral and Innovative Leadership, takes place at the Melia Hotel and the Zanzibar Beach Resorts in Zanzibar.
The youth leader who has worked with GPF Ireland since its inception in 2013, said, Zanzibar was chosen for this year’s Global Peace Leadership Conference (GPLC) 2015 because it is the “melting pot of cultures”.
“It is called the Spice Island” because, although they are different religious beliefs and dimensions, everyone lives as one in Zanzibar. This is also the call of GPF, where we live as ‘One Family under God’”, Mr Mohamed added.
Mr Mohamed said he is “very proud to be a member of GPF” and hopes that GPLC 2015 will “provide a tangible Zanzibar communique that will build ideas that Zanzibar will benefit from”.
Canadian, Tammy Hoblak has been volunteering with Canada World Youth since 1987. She has been working closely with GPF in Nepal, Indonesia and Africa to expose youths to, and build capacity for empowerment, community development and entrepreneurship.
Ms Hoblak said: “I am a big fan of GPF – I find that they are where action needs to take place; they aren’t afraid to cross boundaries; to have people of different sectors and faiths at the table.”
The Canadian said, the participating heads of states and other leaders should influence policy so as to insure funding and space for youths to move forward in a way that this generation needs to advance.
“I feel that it is really significant that GPF has connected with Zanzibar; it is a really special place.
“When you are in Zanzibar, people are curious and excited; so I feel that what comes out of the conference can meet the agenda that there will be special action and attention to the items that are declared”, Ms Hoblak added.
In recent times, the East African region has witnessed a rise of intra-state and interstate conflicts, which have caused a protracted tale of human suffering; loss of lives; displacement of people; destruction of social fabric, physical infrastructure and natural resources of the region, in particular its coastal strip. 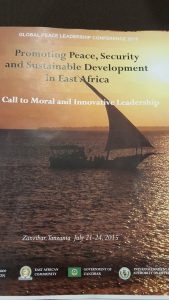 The Global Peace Foundation is working in partnership with the Government of Zanzibar, East African Community, Intergovernmental Authority on Development, Inter-religious for Peace Tanzania and Cloud Media Group to address these issues.
The event will coincide with the coming to Nairobi, Kenya, of American President, Barack Obama, from 24 to 26 July. The American president will address a summit on global entrepreneurship. It is feared that his visit could provide a target for terrorists.