Monday’s première of Trevor Noah on The Daily Showon Comedy Central in America witnessed moments of hails and ouchs. Critics believe it was to be expected, as the debut show wrapped at 6am South African time.
Trevor Noah just landed a new position, one that calls for scrutiny from all five continents.
The new host’s first punchline hit the audience without missing – he paid tributes to viewers and Jon Stewart for believing in him.
He said: “This is as strange for you as it is for me;” This must have been denoting the new face to host the show in 16 years, which is just about half his age.
The audience ruptured with cheers, claps and laughter when he said: “… Jon Stewart was in many ways our political dad, and it’s weird because dad has left. And now it feels like the family has a new stepdad, and he is black.”
The audience applauded the lines, but this was not evident in the after-show reviews. Even less was the enthusiasm of TV editor, Robert Rorke.
He wrote on the New York Post that: with Trevor’s “ever-present smile, he projects a genial almost mild camera presence but lacks anything resembling the kind of edge that made Jon Stewart a name to be reckoned with.”
He added that: Trevor “has a hard road ahead of him.”
‘Twitterland’ went into over-drive, with some referring to the new host’s jokes as sexist, bigoted, anti-Semitic, tasteless and hateful. Some considered him to be wasteful, flat and derogatory.
Comedy Central issued a statement following this meltdown; they said, Noah was a “provocative” comedian who “spares no one, himself included”.
“To judge him or his comedy based on a handful of jokes is unfair,” and that he has “a bright future at Comedy Central,” the network continued. 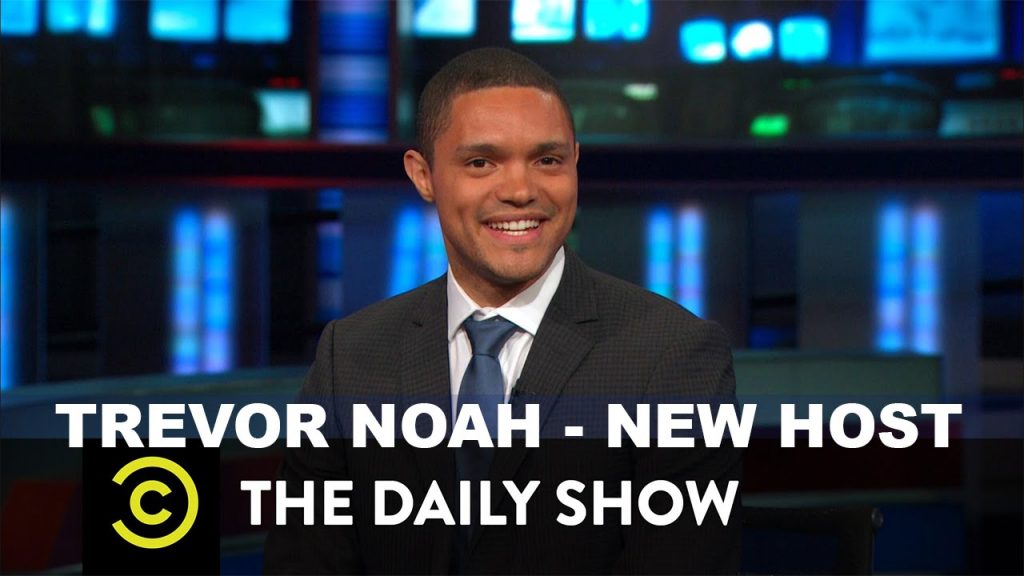 Thirty-one year old Trevor Noah is a South African comedian, and born to a white Swiss father and black mother, and who is well known for referring to himself as “I was born a crime”.
He wasted no time in also reiterating his “dusty” beginnings during the show’s opening:
“Growing up in the dusty streets of South Africa, I never dreamed that I would one day have, well, two things, really: an indoor toilet and a job as host of The Daily Show”,  before adding; “And now I have both and I’m quite comfortable with one of them.”
Speaking on CNN, Trevor’s grandmother said, growing up, Trevor slept on the coach with his cousins, but she would hide him each time the officers came because of the times – indicating the Apartheid period.
She said of Trevor: “… He is naughty. He wants where he is, there must be laughter; no tears.”
The new host of The Daily Show is a heavy weight in South Africa; he has performed all over the country, including his stand-up comedy specials in 2009, Crazy Normalin 2011, That’s Racist in 2012 and It’s My Culture in 2013.
He moved to the United States in 2011 and in 2012, he became the first South African stand-up comedian to feature on The Tonight Show, and in 2013 on Late Show with David Letterman.
During his debut on The Daily Show, he showed “teeth” in subjects such as the resignation of the 61st Speaker of the US House of Representatives, John Boehner, Pope Francis’s US visit, interview with Comedian, Kevin Hart, and the discovery of water in Mars, among other subjects.
Trevor’s edginess was also evident when he said a woman isn’t the new host of The Daily Show because they turned it down, and that Americans rejected the job and is once again being done by an immigrant.
Trevor is not the first immigrant to host a US comedy show. In September 2014, CBS announced that British comedian; James Corden was the new host of the Late Late Show. James took over from veteran host, Scottish born American comedian, Craig Ferguson. He continues to have mix reviews.
The Hollywood reporter’s Tim Goodman said of James’ debut: “He’s different. The glaring difference is that he comes without almost any snark, which is a modern American late-night talk show host must-have quality that was only recently spurned by Jimmy Fallon.
It is certain that Trevor will receive mix reviews until he becomes more comfortable with himself, and until viewers adjust to the new multicultural personality and style of hosting.
Some critics have argued that the South African’s appointment has brought him from obscurity – the unknown to the known. True, but it can also be argued that the new host will add the likelihood of more viewers to The Daily Show for at least the first few episodes. There are up to 53 million people in South Africa, the population size of three US States, California, Illinois and West Virginia.
What’s more, the thrill of an African host on an American show might entice the entire continent, which is the second most populated on earth, at 1.1 billion.
Trevor comes from a country with 11 official languages and one can say, like South Africa, America is a deeply troubled country, caught on the lines and rifts between blacks and whites. This background will help to prepare and spin cutting edge content, buttress his personality even further, and set him apart from John Stewart and other predecessors.
The comedian assured the former host, Jon Stewart, of his loyalty. He said he won’t make him look like “‘some crazy old dude who left his inheritance to some random kid from Africa’.
It’s unknown how that went down with Jon Stewart, but critics hope Trevor will stop laughing at his own jokes and stop being flat and start being satirical enough.
What is known is that, in time, he will find his own strength to become a name to be reckoned with.
Monday night was a test for the South African, but it will take weeks, and perhaps months of episodes after episodes for his performances to be evaluated. It is hoped that by then, his youth and charm personality may develop and transform him to a man who is “comfortable” with both the “indoor toilets” and “job as host of The Daily Show”.